The Pilotta, an imposing palace symbol of the ducal power of the Farnese family, and the historical and civic center of Parma, is today a unique Monumental Complex.

The Farnese Theater, the Parma National Gallery, the National Archaeological Museum and the Palatine Library, are united by their common history. With collections rich in small and large treasures, once separated but now reunited, they give life to a cultural and scientific center that opens up to a new dialogue with the citizens of Parma and the world.

THE CONSTRUCTION OF THE PILOTTA

The Palazzo della Pilotta is a monumental complex consisting of several buildings constructed over different time periods. Originally conceived as a building for the Farnese court, able to integrate the system of ducal residences, linking the Representative Palace (now Palazzo del Giardino), located beyond the stream and the most modest building that housed the Farnese court, located on the opposite bank near the historic center, which no longer exists. The Pilotta has expanded between the sixteenth and seventeenth centuries to take on the imposing dimensions that still characterize its gigantic size, almost monstrous compared to the small size of the ancient city.

Its name derives from the noble game of the “pelota” that was played in its courtyards on particular occasions.

It is at this time that the functional program of the Pilotta is specified: a huge service building next to the ducal residence, which no longer exists today, which once looked onto the main road of San Barnaba (now Garibaldi Street).

The long corridors arranged orthogonally determined a real “citadel” with a system of inner courtyards enclosed by high rustic brick walls that characterized the complex as an out of scale project compared to the traditional medieval town. Inside this citadel the stables, barns, and court’s warehouses could be found, as well as the Fine Arts Academy, the dwellers’ house and the grand arms room later transformed into the court’s theatre.

The construction was directed by the master builder Giandomenico Campanini and the buildings quickly rose around the original core of the “Corridore”, so as to form the three large courtyards of San Pietro Martire (now called della Pilotta), of the Guazzatoio (originally called “della pelota” ) and the one known as the Roquetta. The grand scissor staircase, the first example in Italy of a three-stair staircase modeled after the Escoria’s imperial escalera – covered by an octagonal dome, which led to the Farnese Theater (and which today constitutes access to the National Gallery and the Palatine Library ), was almost certainly designed by Simone Moschino.

THE PROJECT OF THE FACADE IN PIAZZA GHIAIA

There are also three studies for the main façade, which was to face south, towards the Ghiaia market, of which two have been attributed to Moschino and one to Pietro Francesco Battistelli, set designer and court painter.

On the death of Ranuccio, Cardinal Odoardo Farnese (1537-1626), regent in the name of his nephew who bore the same name, sent for the architect Gerolamo Rainaldi (1570-1655) from Rome to assist Battistelli in the work on the facade. Rainaldi had to deliver a project for the façade facing the Ghiaia, but after a promising start the works did not progress and in the end the project suffered a definitive setback, breaking Ranuccio’s ducal dream of forever.
The extensive façade facing the Ghiaia was in fact never completed, nor was Ranuccio’s successors able to drive the Dominicans away or to demolish their convent complex with the church of San Pietro Martire, which was wedged as a disturbing growth inside the Courtyard of the Pilotta, and that was completely demolished following the Napoleonic suppression in 1813.

FROM THE COURT TO THE CITY: THE TRANSFORMATION OF THE PILOTTA FROM THE LAST FARNESE TO TODAY

Thus abandoning the project of a monumental front towards the Ghiaia, the Pilotta will remain above all an immense “container” of ancillary services to the ducal residence. It became an aggregate of imposing buildings added together according to changing, sometimes contradictory, projects and almost always unfinished.

The only constant that can be recognized in the course of its centuries-old and tormented building story seems to be the choice to distinguish two distinct areas in the monumental complex: the southern part of the building – next to the ducal residence – immediately qualified as the “Cultural” wing – gradually holding theaters, galleries, museums and libraries, while in the northern part stables, barracks, barns, garages and laboratories were relegated, with their unpleasant smells and noises.

It was especially the interiors that interested the last Farnese, who centralized in the Pilotta the extraordinary artistic collections of the family. Around 1649 the famous library and the prestigious collection of ancient coins arrived in Parma; in 1662 the famous picture gallery and drawings; in 1673 a part of the ancient statuary in marble and bronze.

If at first the paintings were housed in the renovated Palazzo del Giardino, the will of Ranuccio II (duke from 1646 to ’94) to renovate the long Corridor Gallery and transform it into a modern space where to display the most precious jewels the family harvest. This intention was pursued decisively by his son Francesco (duke from 1694 to 1727).

Thus, during the last Farnese period, the imperial staircase ascended to the vestibule from which the Library was accessed on the left, in the center of the Aleotti and Lolli theaters, while on the right, the doors of the Gallery of the paintings and the Chamber of the Globi (the scientific cabinet).

Once the dynasty was extinguished and all the Farnese heritage was transferred to Naples in 1734, the Pilotta was deprived of its artistic wealth and only with the settling of the Bourbon court in Parma did the fervent building sites of the past reopen in the gigantic palace. Thus it was during the second half of the eighteenth century with the constitution of the Ducal Academy of Painting, Sculpture and Architecture (1757) by the new duke Don Filippo di Borbone (duke from 1749 to ’65), and the foundation of Biblioteca Palatina (1769) by don Ferdinando (duke from 1765 to 1802), that the Palazzo della Pilotta soon regained its core function of the cultural activities of the court and the city, a role that it will maintain substantially until today. Compared to the Farnese period the locations of the Library and the Picture Gallery were reversed: thus the ancient library room now housed the newborn picture gallery while the new bookcase found place in the wing of the ancient “Corridore”.

During the Restoration period, during the happy duchy of Maria Luigia of Austria (1816-47), all the cultural institutions present in Pilotta underwent remarkable transformations: the roofs of the Farnese Theater (1819) were restored, the Sala De Rossi was annexed to the Library (1820), the Accademia Gallery was expanded (1821-25), the opening of the State Archive and the Palatine Library, for which a new building was built (1832-35).

The interventions concerned above all the interiors, while in the exterior of the building continued to maintain that heterogeneous and rough appearance that had characterized the building since its origin.

With the intention of giving greater dignity to the ducal residence, Maria Luigia entrusted the court architect Nicola Bettoli with the arrangement of the interiors and the rooms of the court; the reconstruction of the facade of the Palace was carried out between 1833 and 1834, assuming an elegant neoclassical character.

The destruction of the building, which took place following the disastrous bombardment that struck the Pilotta in 1944, contributed even more to crystallize the current image of the Pilotta as an imposing “ruin” located right in the heart of the city.

From the seventies began a profound restructuring of the interiors of the monumental complex. These reconstructions by the Superintendency for Historical and Artistic Heritage included the south, north and west wings and the Farnese Theater. They were carried out in excerpts, until their completion in 1991 with the overall reopening of the long itinerary of the National Gallery. This allowed in addition to the restoration, the renovation of the floor, a total rethinking of the museum itinerary, a reorganization of the collections, an expansion of the services and the re-edition of the general printed catalog of the works after those of 1896 and 1939. The works are then continued with the restoration of the spaces, now used as Offices, Library, Consultation Rooms of the Superintendency for the Historic Artistic Heritage, completed in 2001. The last stages concerned the 19th century collection, whose premises have already been destined but the works had not yet started and the great Court of Guazzatoio, completed in 2007: a large area that characterizes the entire complex and that can have the widest use in consonance with the Institutions that occupy the Palace. 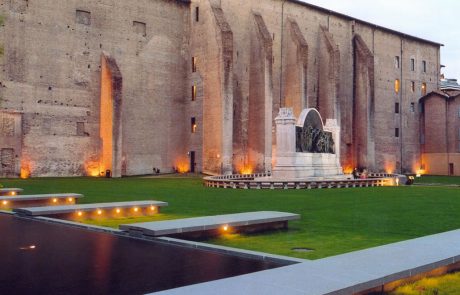 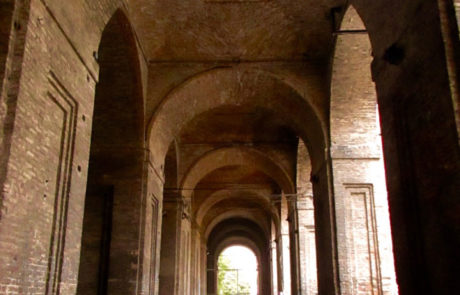 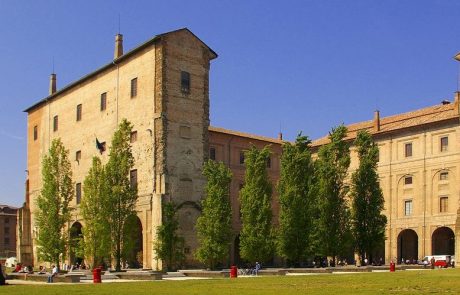 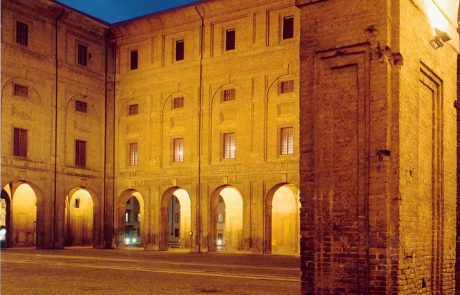 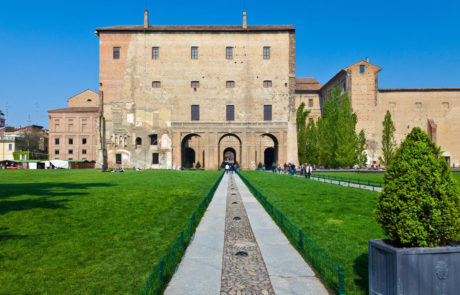 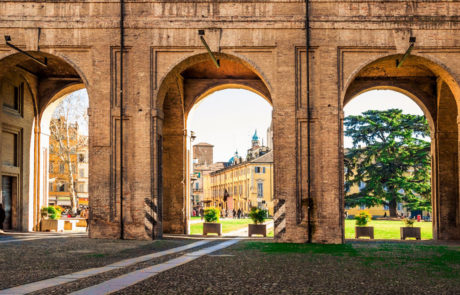 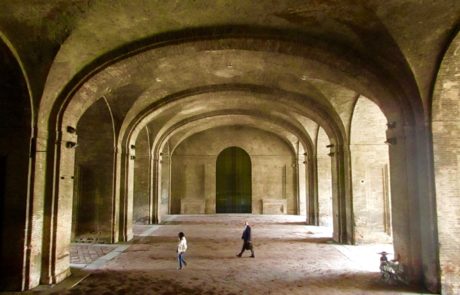 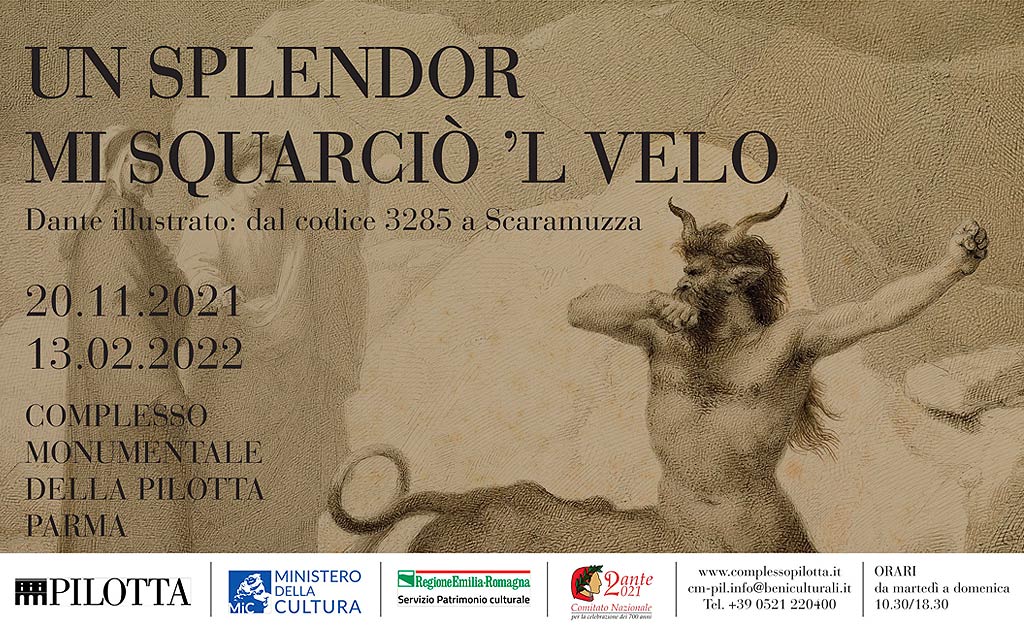