TIME PAST, PRESENT AND FUTURE is a contemporary art installation commissioned for the Monumental Complex of the Pilotta realized with the support of the Italian Council (4th edition 2018) promotion programme of Italian contemporary art in the world, promoted by the contemporary Creativity General Direction and Urban Regeneration of the Ministry for Heritage, Cultural Activities and Tourism.

A project of contemporary art with the objective of restoring centrality and dynamism to the institution and its presence in the urban and social organization of the city of Parma, generating a process of dialogue between the monumental historical container and the people who experience it on a daily basis, encouraging engagement with the citizens of Parma and Italian and foreign members of the public in accordance with the mission of public service typical of all the participating museums.

The work realized by Maurizio Nannucci consists of a graphic neon installation which runs along the whole perimeter of the courtyard of San Pietro Martire creating an ideal link between history, the Complex collection and the present; between the inside and outside of the building passers-by are invited to slow down and stop to contemplate an aesthetic which brings together images and words in a conceptual poetic expression which, from the work itself, disseminates to embrace the Complex and the surrounding space.
Neon is normally used for signs and is a typical element from the “street” which informs, orients and guides attracting the attention of passers-by and which, in the artistic research of Maurizio Nannucci, becomes an expression of meanings, of highly symbolic content underlined by the rigorous and careful study with which the artist identifies the words which make up the work. Through the means of graphics, communication is condensed in a clear and synthetic form, that of the written phrase which, thanks to the use of colour, is enriched with a sensory component able to emotionally involve all types of public.

Given the consolidated experience in carrying out his projects, the choice of Maurizio Nannucci is not casual. An artist of international fame, he is one of the most original and innovative Italian masters of recent decades whose work can be found in the most important world museums. It can be said that Nannucci has become over the years a specialist in the contemporary reactivation of urban spaces all over the world. Some of his most recent installations, conceived of exactly in the spirit of a resemanticisation of historically crucial institutions, have been realized for the facades of the Uffizi, the Altes Museum of Berlin and the MAXXI in Rome.
Since the 1960s Nannuci has been exploring the complex relationship of language, writing, shapes and visual images designing conceptual expressions with a wide range of technical means including photography and audio or video installations. A multidisciplinary approach weaving together art, architecture, words and poetry which, applied to the Complex, has been designed to reveal efficiently the correspondence between the present and historical patrimony in order to re-awaken culturally, using appropriate means of enhancement, the spaces of the ancient structure through contemporary language. 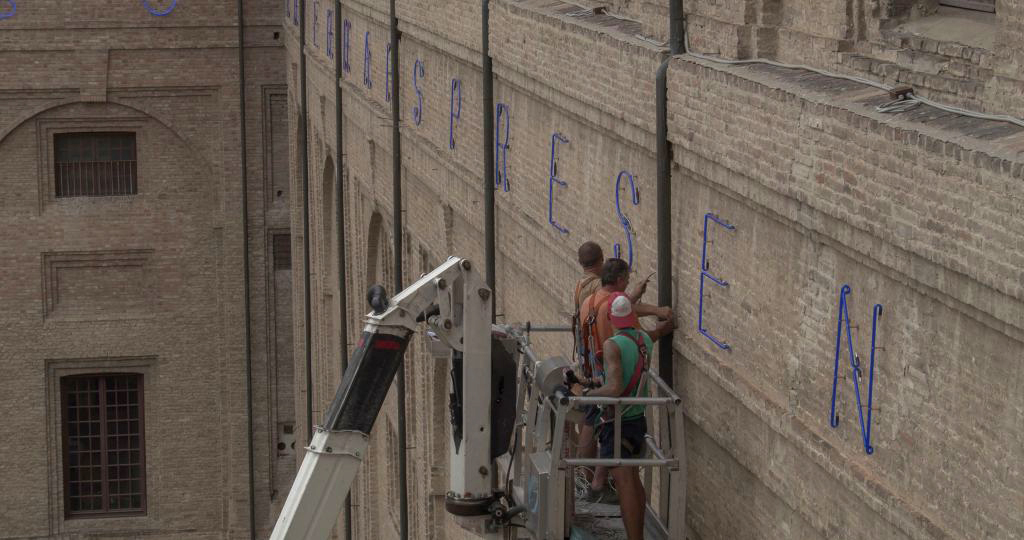 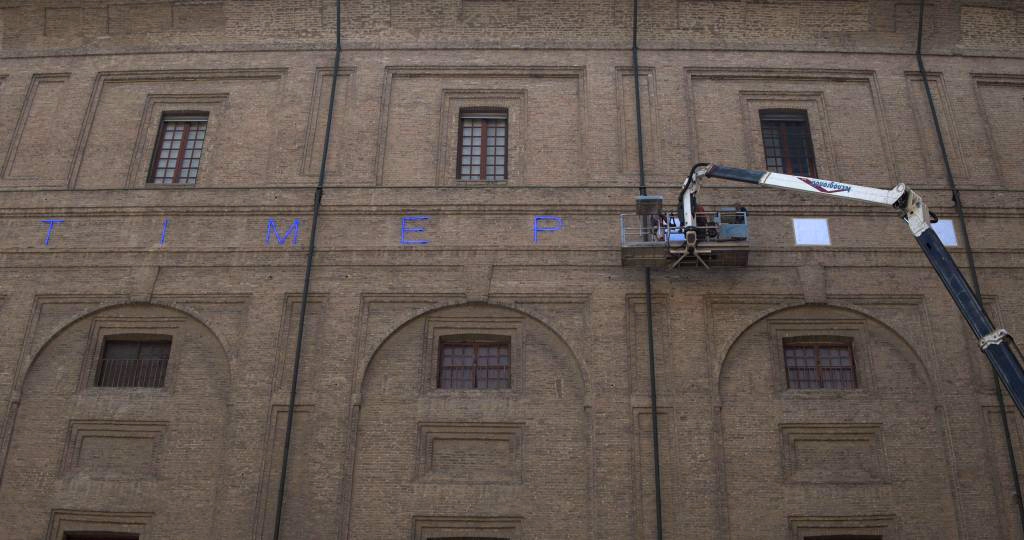 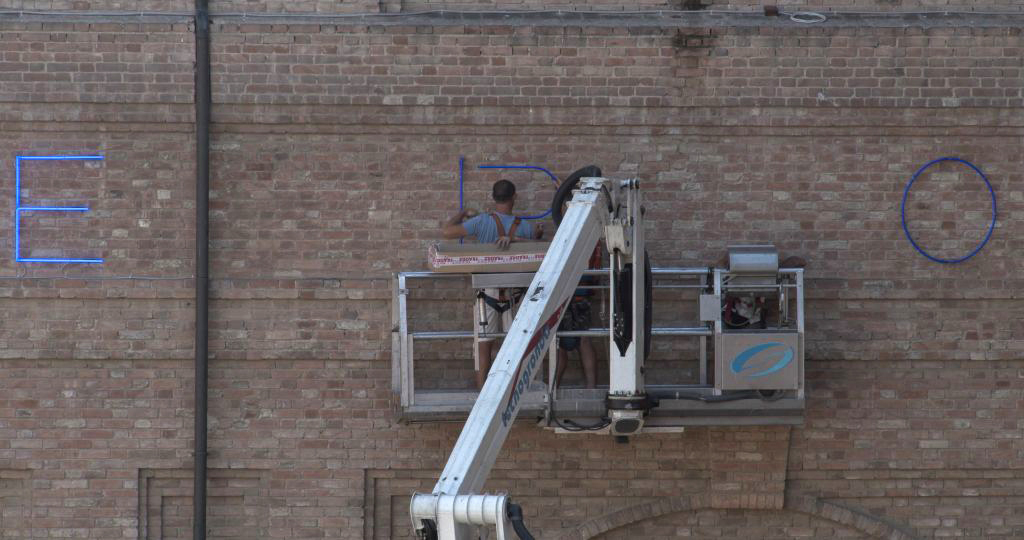 TIME PAST PRESENT AND FUTURE is the largest permanent work realized by Maurizio Nannucci in Italy. The quotation comes from the first verse of “Burn Norton” (1935) from the famous poetic collection “Four Quartets” by Thomas Stearns Eliot.

The choice of this famous passage from Eliot’s poem takes on the theme of the regeneration of the values of the past through the cultural, scientific and creative action of the present summarizing in a literary key all reflections as to the meaning of heritage and the objectives of public policies towards such heritage, for which the Pilotta Complex as a State Institution has wide ranging responsibility. Considering, then, that this text was written in 1935 at a time when the dramatic premises of the war which would lead to the great damage to the Pilotta Palace and the courtyard of San Pietro Martire were being laid, the words take on a universal meaning beyond the peculiarly contemporary witnessing of the event or the symbolic compensation for lacerations undergone as well as of memory and warning for a fully aware use of the past. The light installation which is 190m long and consists of 55 neon lit letters in Murano glass, develops along the four sides of the courtyard of San Pietro within the Complex of the Pilotta. It is in relief in a space accessible to all giving life to a new monumental entrance to the building.
For those who work within the building and for passers-by, the light installation represents a sign which changes shape and chromatic intensity during day and night. At dawn and after sunset its presence is stronger: light and brilliance evoke within the mind a source of orientation and inspiration.

The reflection of the neon letters is soft, the blue light invites you to examine the words and interpret the meaning of the installation, considering it as a synthetic conceptual manifestation of absolute values, related to a piece of historical architecture which must satisfy every day both promises and potential.

The neon writing offers something unexpected and unusual, and that is a meeting with a work whose meaning and significance must be explored individually by all. From an architectural point of view, the creation, integrated into the historical structure of the Palace of the Pilotta, is rooted in the XV and XVI century tradition of inscribing mottoes, erudite references and classical citations on both the interior and exterior facades of noble residences in order to emphasize the intellectual nature of renaissance architecture. Here the inscription underlines in a contemporary key the cultural identity of this space and its value in the present. As a literary text, the work references not only the rich and prestigious collection of the Biblioteca Palatina housed within the complex, but with its monumental form suggests a type of artistic exercise, thereby creating an ideal continuity with the printing house of the famous typographer Giambattista Bodoni, who inspired Nannucci in the codification of his fonts, which is also to be found in Pilotta and now transformed into a museum. Finally, as a work of art the intervention visibly characterizes the edifice and its courtyard as an institute of public collections of both national and international importance. The installation is composed of blue neon tubes of 18mm diameter, which allow for a vision of the work even when not illuminated, and each letter is 85 cm high. The work with its specific characteristics is integrated into the structure of the historical architecture of the Palazzo della Pilotta and can be illustrated through the use of a number of “key words”. 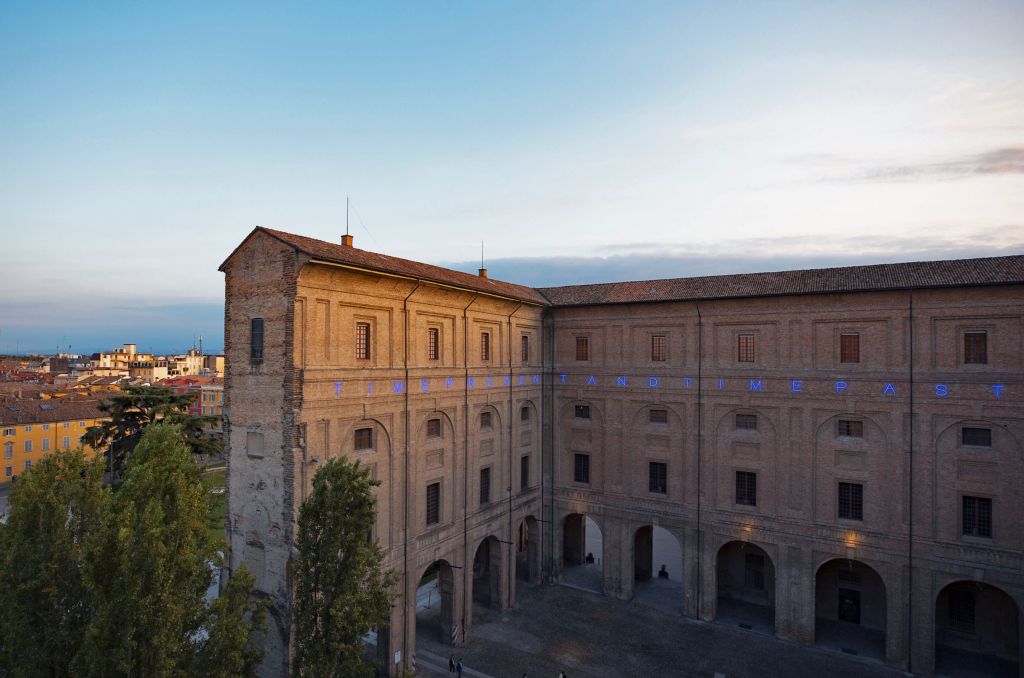 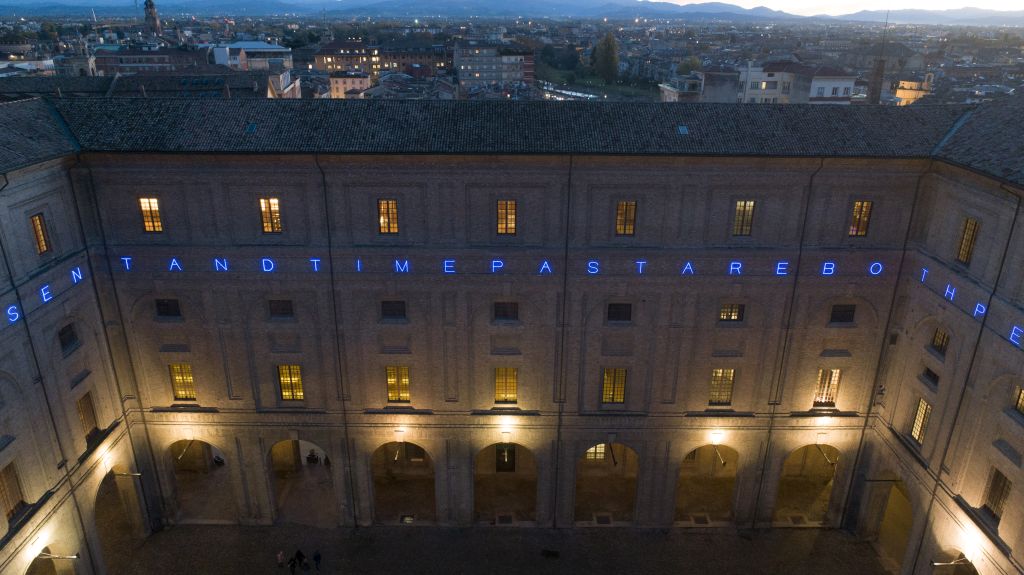 Maurizio Nannucci has been a protagonist of Italian art for a number of decades.

Since the 1960s the artist has been exploring the relationship between art, language and image, between light-colour and space creating unpublished conceptual projects, characterized by the use of different means: neon, photography, video, sound, artist’s books and multiples. 1967 was the date of his first neon works which gave his creations a dimension more varied in significance and a new perception of space. Since then his research has always been interested in an interdisciplinary dialogue between the work, architecture and urban landscapes as shown by the numerous collaborations with Renzo Piano, Massimiliano Fuksas, Mario Botta, Nicolas Grimshaw and Stephan Braunfels. In 2015 the MAXXI in Rome dedicated an anthology to the artist preceded by the most recent personal exhibitions: Musée d’art modern et contemporain, Saint Etienne, Galleria degli Uffizi, Florence, Palazzo della Triennale, Milan, Altes Museum, Berlin, Mamco , Geneva and Lenbachhaus, Munich. His neon installations are present in places and public institutions worldwide: the Rome Auditorium Parco della Musica; the Berlin Bibliothek des Deutschen Bundestages; the Kuntshalle in Vienna; Lenbachhaus, Munich; the Fondazione Peggy Guggenheim in Venice; Museum of Fine Arts, Boston; MAXXI, Rome; the Museo Novecento, Florence. On many occasions he has taken part in the Biennali d’Arte e di Architettura; Documenta of Kassel; the Biennali in San Paolo, Sydney, Istanbul and Valencia. 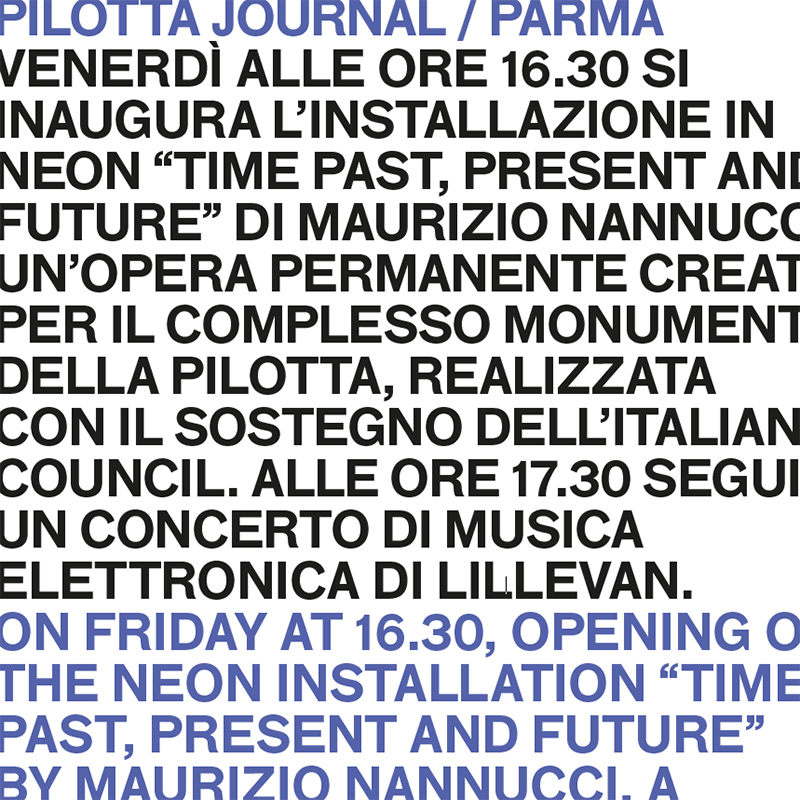 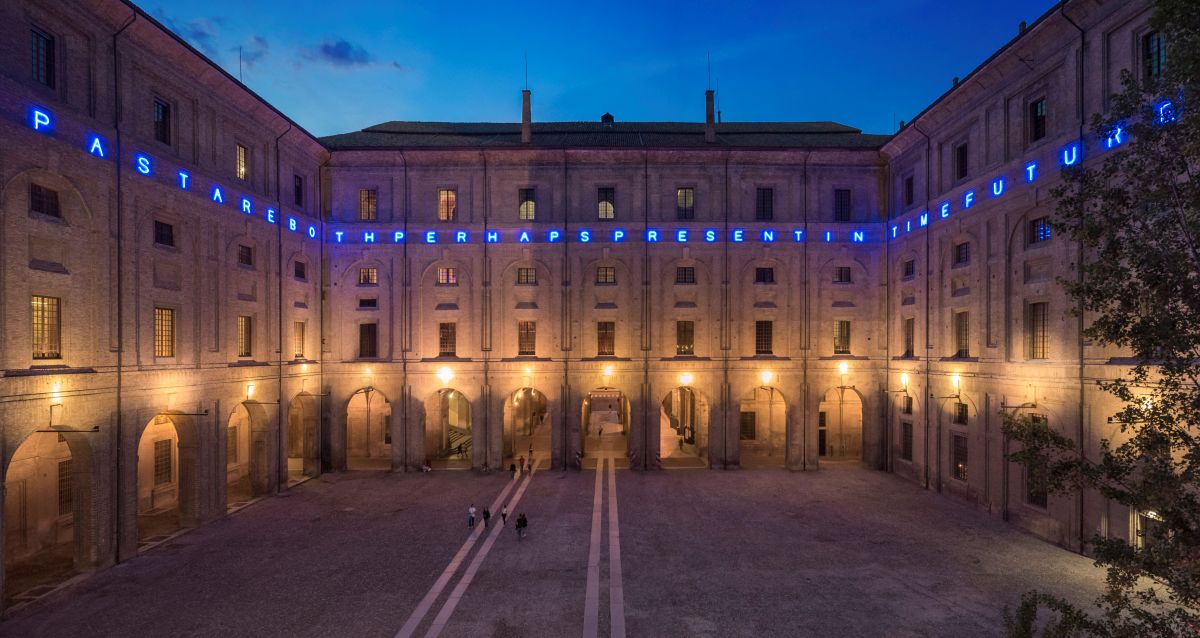 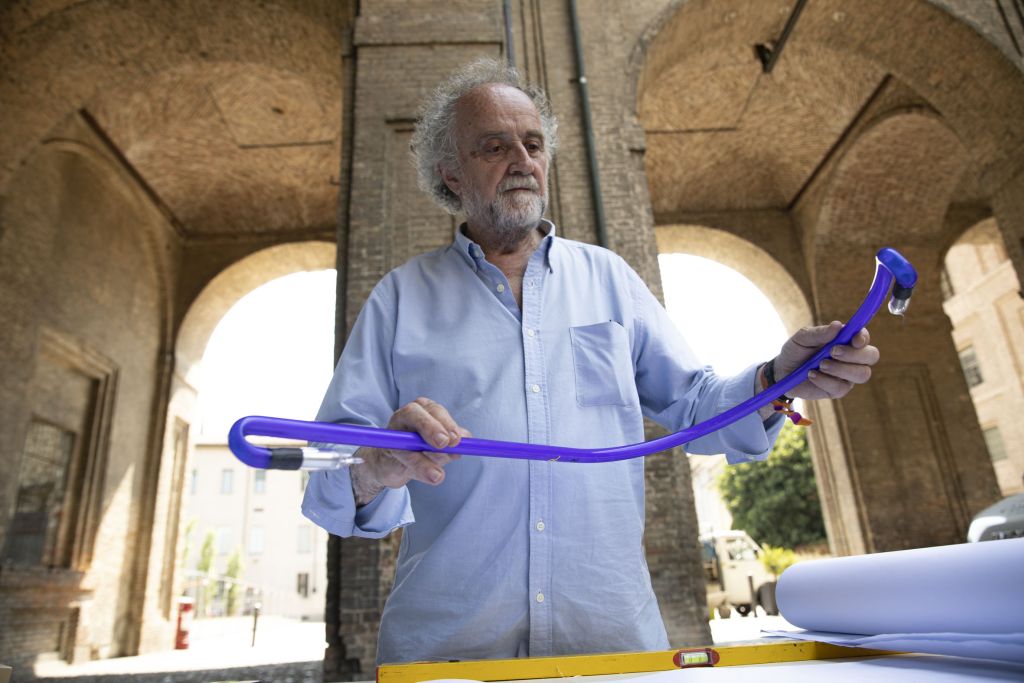 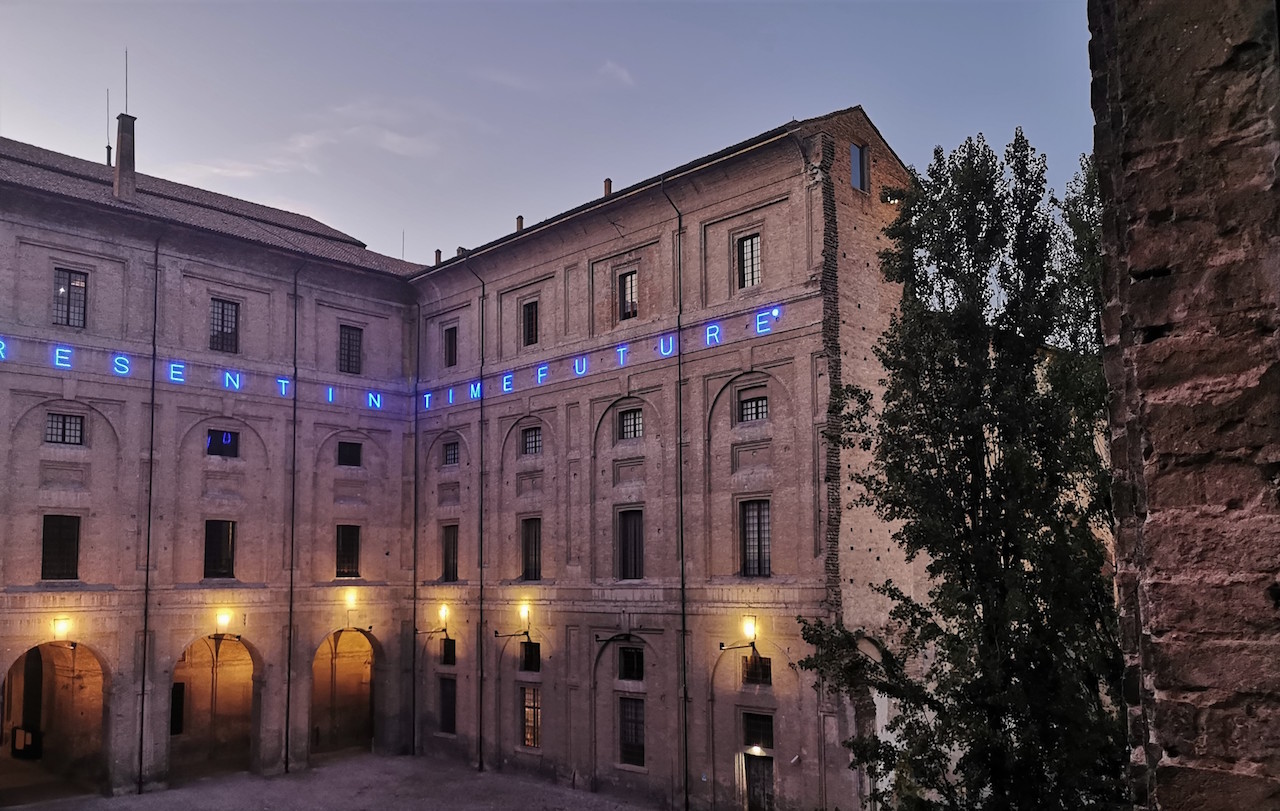 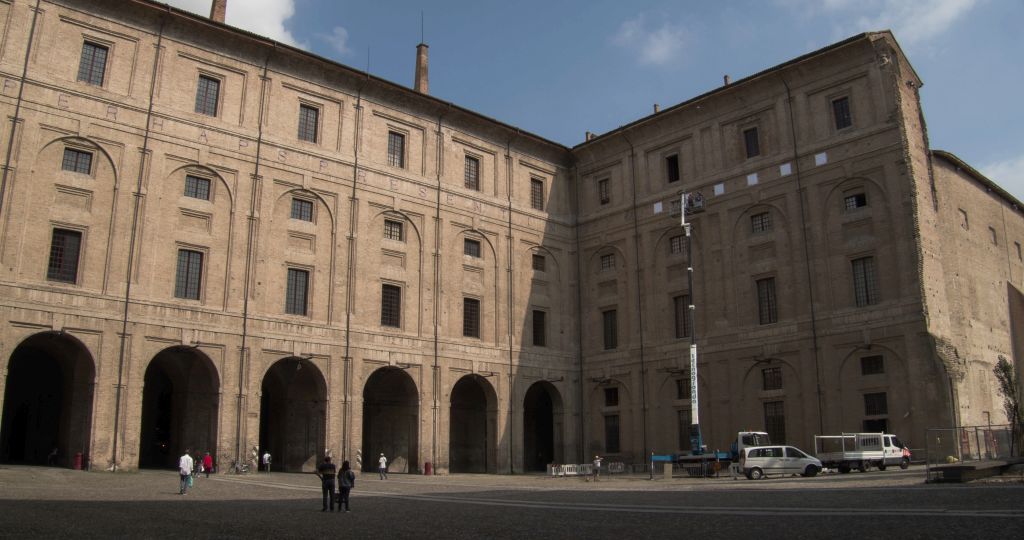